As I have not yet tied the bow up on my studying abroad experience, it was an adventure of a life time. Taking in every little moment, walking till you can no longer feel your feet, waking up early and going to bed at dawn. The girls I shared my experience with hold a part of my heart forever. We shared some of the first moments th 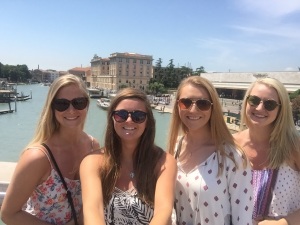 at took our breathe away, laughs until we cried, and stories of our dreams and passions. For that, I will forever be indebted to them for their friendships.

Once getting home you have hundreds of thousands things swimming in your brain. All the people you want to see, the things you may have missed. You even start planning your next adventure over seas before you even get home! You reflect on how the adventure made you feel and how you, as an individual want to change. You learn so much about yourself, and at least for me, vowed to make positive personal change/improvements. I wanted to start to enjoy every moment, not wish the days away, do things because I want to not because I have to and so much more. One large thing that I took away was my career/future job/work, whatever, it doesn’t have to be my whole life. I want to love what I do and feel fulfilled with my work, but my work doesn’t have to be my soul piece of fulfillment and happiness. Yes, my family and friends with be a large source of my happiness, but I will have my career to support my love of adventures and making memories that you will never forget.

This past semester I struggled implementing my goals that I vowed myself too when I arrived home. I found myself saying yes to things I really didn’t want to say yes to, and wishing my days away. Yet, it was a semester filled with exciting beginnings: putting on the CMU 2016 Career Fair and walking away with multiple offers and accepting an internship with Domino’s headquarters. I  inducted a little into my business fraternity, and embarking on a Nationals Cheer journey on Small coed, where we walked away with a  5th place finish and making CMU history. Yet, when there are highs there can also be lows and we can’t let those lows over shine you highs. Lows like stress, family sicknesses, overworking, no sleep, not taking time for yourself etc.

This spring semester I am going to work to improve upon my goals and work to better myself. I have the amazing opportunity to be a teacher assist in a leadership theory class. Where I will be working with the 2016 Leader Advancement Scholar Cohort to help them expand their leadership knowledge. An opportunity that rolls together my passion of leadership  and mentoring/teaching.

To the next adventure!

The concept Fourth of July in Italy stumped us for a moment. I believe this is when the four of us really had our first bout of homesickness. As we got plenty of pictures of friends and family together at lakes and cottages, barbequing and enjoy each other’s company…all while we were here, in Florence, in our apartment with no air-conditioning, in the 100 degree weather, with no water but a river that is not at all a swimming river. SO with that we took it as a challenge. We’re going to the beach!

We asked around in our class and found out that Via Reggio was the best place for us to go. Train ticket was cheap, you get mountains in the background of the ocean, warm water, cute town, good gelato. Honestly all we needed to know was that there was a sand beach. We were very ready for the 4th knowing we would be on the beach but celebrating the birth of the United States of America on a beautiful beach in Italy. With that Olivia brought her American flag towel and we were off. The beach was beautiful a picture couldn’t capture it. And it was HOT! But with a perfect temperature ocean with some decent waves we needed nothing else. We walk up to the beach and it is just covered with tons and tons of umbrellas only making space for a little walk-way from the “club” to the water. The beach was divided into many clubs as you walk the shore each different color umbrella was a different beach club. So we went to the first one we saw and bought 4 chairs and an umbrella each item 5 euro. Then having to walk down to the life guard hand him the receipt and he showed us to our spot and made sure we “got what we ordered”. To all of us it was very weird… myself knowing New Jersey beaches, Jenna knowing California beaches and the other two knowing the lake routine this was very different. Finally getting settled we lay down to realize one we are melting and two we are starving. We jump into the water swam, which was like bath water the under tow was very strong but the water wasn’t deep at all maybe to my hips so we kneeled and jumped waves. We laughed the whole time. We left he water and went on our next hunt, time for food. We walked up to the club shack thing and all they had was a mini bar and some ice cream (no what we were looking for). Not knowing still to today if it was appropriate for us to do so we club hopped looking for some drinks and a sandwich. We found one after some walking and I had a delicious tuna sandwich (first time I’ve seen mayo since we’ve been here, I was pumped) with a mojito (it was like drinking the forest there was so much greenery in it). All in all it was pretty good. Heading back to the beach we were happy to find that nothing was stolen from our spot so we laid down now for a nap and for me my book :).

For the rest of the day we moved one more time to get in the water and cool down, and then for a walk where we saw a plethora of topless women and banana hammocks. We were having the Italian beach experience. Until the very end of the day we went to find some gelato to not only find gelato but to find that all of our skin was as red as red can be…

All we could really do was laugh at this point. Jenna looked the worse later that night once we got home her red face and chest matched our red couch in the living room (it was hilarious). Until my slightly pink chest and stomach decided it wanted to blister (this was a day after I thought it was in the clear).

Also, the night we got home we were going to the back of the apartment to hanging our damp towels up on the line wen Angie screams and tells pretty much the whole neighborhood that there is a lizard on the screen (taking a solid three minutes to decide whether the weird flat looking lizard was inside or outside, it was on the inside). Olivia coming in for the lizard rescuer pulls out the Australian ascent and goes in with a bowl, nothing else. We’re all laughing and want the lizard out. Obviously the bowl didn’t work, then she tried to grab it with her fingers. This is when it went to extreme. She finally made contact with the fast lizard’s tail only for it to fall off! The lizard used it defense mechanism to allow Olivia to pull his tail off. She was devastated and we all squatted near the tail with no lizard attached squirm on the ground (for a solid 30 minutes it squirmed). The lizard after that was out of sight honestly we’re just hoping it went out the way it came in.

By then we were exhausted, sun drained, burned, and ready for bed. We woke up the morning of Tuesday July 5th to the burn of yesterday and the first cooking day in class!!! We got to whip out our aprons and print off our recipes and we made Pollo Con le Prugne (chicken with prunes), and Schiacciata Bianca Cappello (renaissance schiacciata with custard). Lorenzo our attractive Italian chef helping us cook this meal was extremely knowledgeable!!! Jenna and I were in charge of the custard for the Schiacciata Bianca Cappello. “This takes patience” Lorenzo said and is did he taught us the way to do it perfect and perfect it turned out!! It is a game with the heat Lorenzo states and that concept lead to him telling us all about how the temperature and timing of how we heat food makes all the difference. The chicken we cooked today was being cooked at a lower temperature to steadily bond the colognes making a moist but still fully cooked chicken breast. You don’t want to cook you meats on to high of a temperature ever or the colognes (proteins) will bond to fast and you will have dry chicken or over cooked meat. He taught us a trick to know when your meat is perfect, and gave us a tip and deep explanation on how never to preheat an oven when cooking cakes, and how to cook the perfect scrambled egg. I felt so filled with knowledge! The meal turned out unbelievable but not as filling as we had hoped.

We went home and all took a siesta, which ended up being way longer than planned, woke up starving and on the search for some lunch. We had a hard time finding a restau 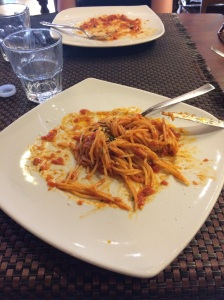 rant that was open, because they eat lunch and then close at like 3 and don’t open till like 7:30pm for dinner. We could only find a place in a piazza (tourist are always in the piazza=open on tourist times). We got our first spaghetti and sauce (meatballs aren’t really a thing here). The lunch was delicious. We walked around and shopped now in a way better mood after finally getting food!!

We met very nice restaurant owners one evening as we were walking around and decided tonight would be a great night to go and actually tryout their food. They are known for their La Bisteaka Florintine. Which is basically this huge cut of steak that gets taken our raw raw and weighed in front of us then to only be cook for 12 minutes coming out still pretty raw. We had no idea how to go about eating this thing us four looked at each other and decided it would be best to ask. They covered the meat with olive oil and told us to squeeze our lemon on it. Weirded out a little by the whole thing I was the first one to put the very raw chunk for meat bathed in olive oil and lemon in my mouth and it was AMAZING!!! Nothing else needs to be said about that dinner the steak was the highlight and I’m not sure if I can eat steak any other way. 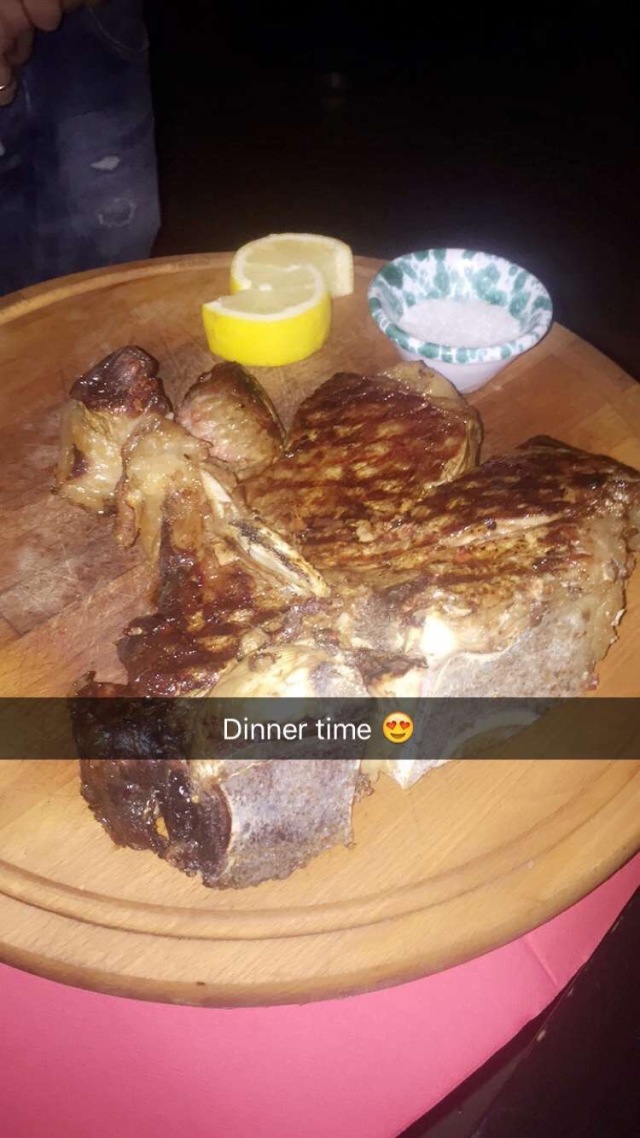